Spraying untreated CAFO waste is risky under any circumstances. But these 4 worst practices – all of them legal in SE Michigan – pose the highest risk for contaminating land, water, and air. And for threatening the health of people nearby, downstream and downwind.

Millions of gallons of livestock feces and urine, along with milkhouse wastewater, facility washwater, are pumped to huge sewage pits called “lagoons.” Contaminated with bacteria, pathogens, metals, pharmaceuticals, this waste goes on ground that drains to waterways. 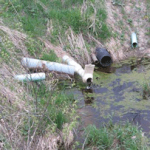 Many farms in the Midwest are artificially drained with a sub-surface system of pipes. These pipes, called “tiles,” also drain contaminated liquids directly to streams. The dissolved phosphorus in liquid manure, for instance, can flow hundreds of miles to the Great Lakes, where it feeds algae, including the toxic algae that threatens drinking water in western Lake Erie.

Untreated CAFO waste sprayed on snow or frozen ground melts when the sun shines or during spring thaw, and flow to ditches, tile inlets, and into streams.To protect the Great Lakes watersheds, the International Joint Commission has called for a ban of manure and fertilizer application on snow-covered or frozen ground.

• Spewing liquid waste from an open-end dragline (a large hose). 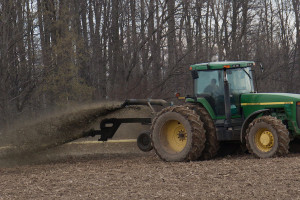 Long hoses are used to transport CAFO waste from manure lagoons. Draglining hoses may run across fields, over drainage ditches, through road culverts and over surface water to reach their destinations. Some of these hoses are so long that they extend for more than a mile, and some are left unattended during the application process, resulting in waste spills, polluting streams. If equipment is not attached to the dragline to inject or mix the liquid waste into the soil, there’s no way to control the rate of application. The liquid waste, highly contaminated, may saturate the ground or pool in the field and seep quickly into drainage tiles – flowing to water we drink, fish and play in.

• Spraying liquid waste into the air.

The liquid waste is applied using pivot spray-guns, or pivot-irrigators, or fan-spraying from tanker-trucks. The liquid breaks into aerosolized droplets containing bacteria, virus, fungal spores, skin cells, fecal matter. The untreated waste is now airborne, and these gases rise and drift.   This suspension of airborne particles (bioaerosols) along with ammonia, hydrogen sulfide and hundreds of volatile organic compounds, smells terrible. The particles are inhaled and retained in the lining of humans and pets’ lungs. Once inhaled, it may triggers asthma, and pose other serious respiratory and cardiac problems for anyone living nearby, and is particularly dangerous for children and the elderly.  “Application methods that launch liquid and solid manures into the air create a potentially hazardous situation as pathogens may become aerosolized and transported to downwind receptors.” – R. S. Dungan, Journal of Animal Science “Downwind receptors” means people and pets!