Up here in the Western Lake Erie Basin  tributaries, we’re finally starting to get rid of last week’s 8” of snow.  Sun is out, temps are finally above freezing, it’s thawing.  Slushy snow, saturated ground everywhere.

Then this morning, we have this.

Warner dry solids, very recent, manure application on snow-covered ground.  Pentecost Hwy. and Dowling Rd., Wolf Creek/South Branch/Raisin watershed.  This field is directly across the road from Loch Erin, which is only a few feet away.  Loch Erin suffers from major Cyanobacteria blooms (HABs) each summer.  This is the headwaters of Wolf Creek, which is dammed downstream to form Lake Adrian, one of the City of Adrian’s drinking water sources. 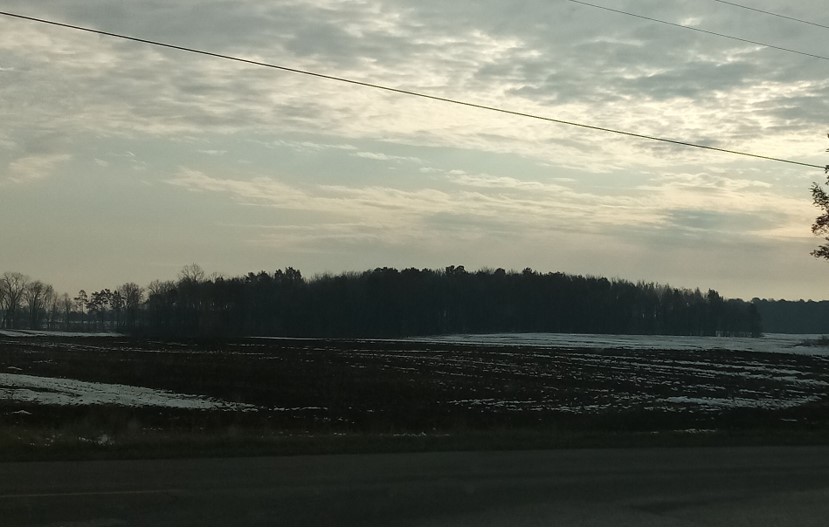 The City has dealt with Cyanobacteria blooms in their reservoir for years, and last year residents complained that the odor of 2-MIB (documented by the City), which can be found along with toxins in Cyanobacteria cells, was worse than ever.  Those complaints continue, with residents saying it is just as bad as it ever was to this day.

Currently, Adrian’s drinking water distribution system is under study by Wayne State University to determine whether or not it has been colonized by Cyanobacteria.  There’s no crop here, and even if there was a cover crop in this field, it would be dormant and wouldn’t be taking up any nutrients as fertilizer.

Application of CAFO “waste” on snow or frozen ground is simply disposal of untreated livestock sewage, the same stuff you flush down your toilet, the same stuff that goes into your community’s wastewater treatment plant.

The State has not required Warner Farms, which according to MDEQ’s inspection in 2018, has approximately 1,480 cattle, and which has had several contacts by the State about potential runoff incidents at its facilities, to get a NPDES CAFO permit.  A 2014 inspection by the U.S. EPA indicated that the decision whether to require a permit would be left to MDEQ (now MDEGLE).  Potential runoff incidents, including from silage storage, have been repeatedly investigated since then by MDEGLE.  However, no significant improvement has occurred and MDEGLE hasn’t required this farm to get a permit.

We have two questions:
What is the agronomic need for phosphorus on bare ground?
Why doesn’t Warner Farms have a Michigan NPDES CAFO permit?

And from the Bean Creek watershed portion of ECCSCM’s monitoring area, we have this very fresh liquid manure application on corn stubble, on snow. E & R application, southwest corner of Rollin Highway and Rome Road.

Coming from this tanker, fan-spraying it onto the field. 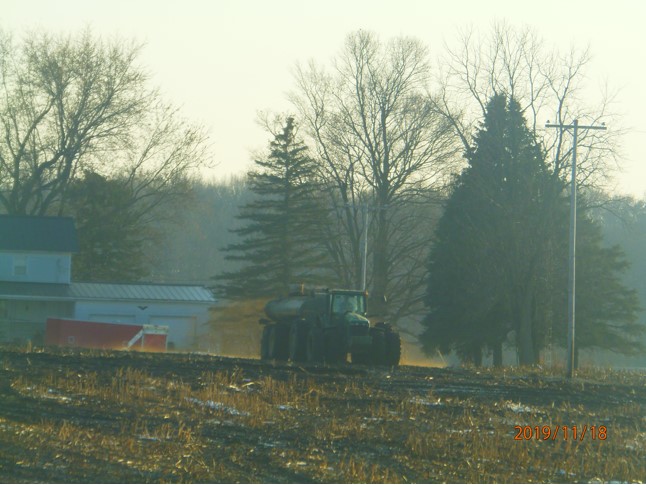 The ammonia in livestock sewage immediately melts the snow on fields where it’s applied.  Temps were up in the 40’s when this was taken in mid-afternoon, the surface soil has thawed, but not the ground underneath.  As long as the ground underneath is still frozen, farm equipment can get into the fields without getting stuck in the saturated soil.

Driving heavy equipment like this over saturated soil compacts it and destroys its structure, which leads to even more runoff down the road as the soil is no longer able to absorb moisture.  Like pouring water onto concrete.